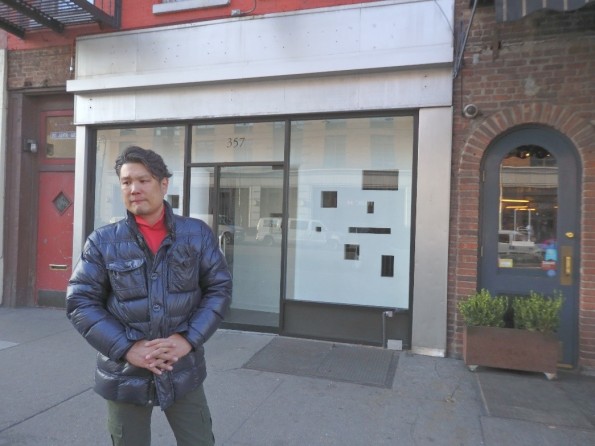 Hello! I’m Takuya, Vice President of Harbor House/Zauo, posting from New York. To explain the reason why I’m here, I need to go back to July 2014, when I had a business trip to New York for an inspection of new business development.

We want to open Zauo in New York!

This was the critical agreement of the Takahashi brothers. Then, we translated the  idea into action straight away! We established Zauo Inc. in New York on November 20th, 2014.

As we have no idea about the future, that’s why it’s interesting.

The detailed future plan has no meaning.

The important things are passion and goal.

With such a belief in mind, we had a meeting in Tokyo with business partners from New York to discuss the development of Zauo New York in March 2015.

After that, we went to the US for the market survey in terms of securing fresh fish, inspection of the property and quality check of Japanese food ingredients!

And this is the 4th business trip to NY.

It shold be OK in considering the site and acting on site.

As for the previous business trip, we only made a reservation for round-trip air tickets and accommodation. As for other issues except minimum appointments, we considered and took action on site in New York in purpose of encountering many people there. We are having this business trip to convey our thoughts to the partners that we met during our previous trip. We firmly believe that the new information as well as new awareness could be gained in sharpening our senses that we could feel only on site. In this issue, I would introduce three episodes related to the new encounters and awareness. 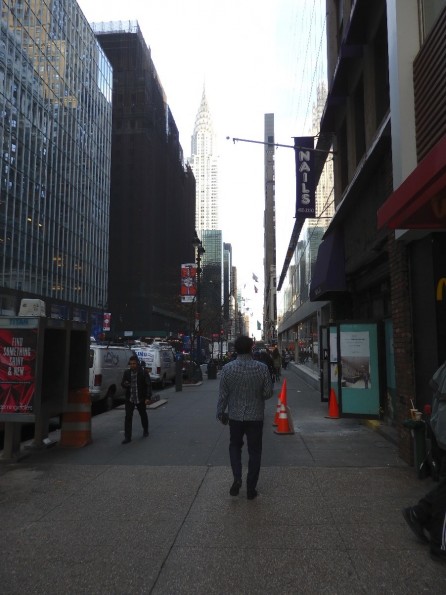 Day 1 in NY on business trip.

Thanks to the introduction by our business partner, we met some person who has a connection with Fukuoka. After having worked for an architecture firm in Fukuoka, he left for America longing for NY. Since then, he has been working for architecture design/construction in NY for 20 years. Despite his gentle and dandy atmosphere, he has a definite aura about him caused by his great confidence. We were deeply impressed by his talk about NY, while listening to his advice in terms of architecture construction as well as application for a public health center.

NYC has an image something like “Our dreams come true in the most leading-edge city in the world.” However, he continued, “You might experience unpredictable things in New York which you never think about in Japan. Your business success definitely depends on whether you can enjoy the failure or breakdown. So many people are coming to NY with a dream, however most of them are leaving with a big stress caused by the failure or breakdown. I have been watching plenty of such people so far. People who seek stability should not come to NYC.”

There were so many assumable subjects including the concept and business characteristic of “Zauo” as well as the issues related to architecture construction and health center. We cannot finish while trying to find the impossible things. Then, he said, “Let’s find the property with which we can feel the positive passion to start business and go for a negotiation with property owner or administration with our concept and plan. Don’t count the number of failures. If you seek the success, the number of challenges and speed mean a lot!” As he said, if we failed, we should find it next time undoubtedly.

“Proceed with 3 steps forward and then move back 2 steps. We cannot move forward one step by one step without a hitch. That’s why the speed to move forward is important. Furthermore, you should enjoy the step back as well”, he said. While having listening to him, I recalled the business policy and mottoes of our company. “We want to open “Zauo” in NYC! “ That is the moment we had a strong feeling like that. 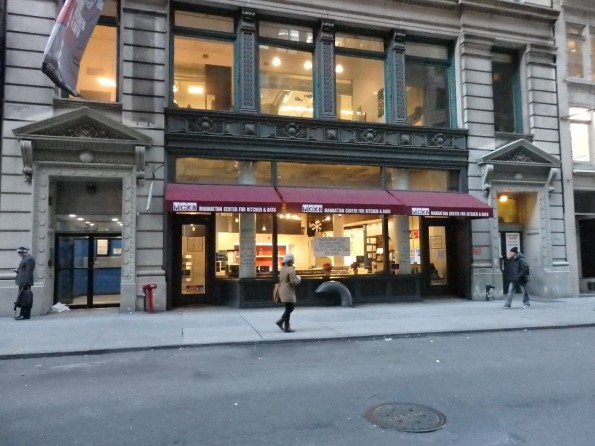 Day 2 in NY on business trip.

We met the president of a company that has been supporting Japanese companies in opening restaurants/shops in the U.S. for the past 20 years.

He is a smart person who thinks logically. We were lost in listening to him with his gentle and smooth talk like a university professor. He talked about the current situation and problems of restaurant business as well as the future prospect of Japanese food boom. While listening to him talking about a variety of issues, I was impressed by his comment that American and Japanese have a huge difference in terms of the perception about “time”.

He said, “Japanese are not late for the appointment, the train/bus in Japan is being operated punctually exactly on time and the delivery from mail order firm is supposed to be received at the assigned date/time.”

According to him, if we think like that as a matter of course, we would have big problems in the U.S. At any rate, we should not be surprised if an American cannot manage to meet a deadline, lead time and appointment time, he advised. This might be caused by the administrative problem or unique idea of a tolerant country that has been accepting a variety of races.

But, he continued, “I don’t mean that Americans are negligent. First of all, Japanese perception about the time is based on a relationship of higher and lower position.” Most of the relationship such as Customer and staff, boss and subordinate, and even between friends, it is a courtesy to be punctual in Japan and few Japanese think about it so seriously. In the U.S, however, the U.S had been accepting so many races/cultures and so the US citizen stands on an equal footing in a variety of aspects. As for Japanese, we try to take good care of our customers/clients and respond to their requests regardless of our own family.

There is a courtesy based on something like a relationship of higher and lower, but privacy is regarded as an important thing in the U.S.; their private matters come first. They insist that the relationship between service staff and customers as well as company and client should be standing on an equal footing at any time, and they never think it as a matter of course to be served by their own payment.

This issue reminds us of a big cultural difference between Japan and the U.S. and eventually it can be applied to the restaurant opening. The delay for 2 or 3 months should be within our expectation! Under the circumstances where many people would repeat such a phrase, the above-mentioned Japanese man said with a smile, “I should keep a promise with my pride of being Japanese! I’ve signed the contract before that I would pay the penalty for each delayed day beyond the assigned deadline.” Furthermore, he continued, “It is fun like a game, isn’t it?   No matter there would be a relationship of rank, I just keep a promise respecting the partner on equal basis.” That was a serious comment only a man with Japanese pride as well as accumulated experience in the U.S. could make. 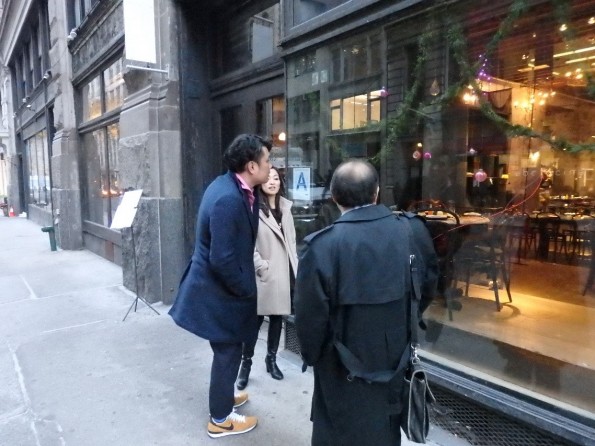 3. A turn of Fortune’s wheel

Day 3 in NY on business trip. Thanks to the incredible encounter, we could expand our network in a natural way. When I believe something strongly, I could be guided in that direction in due course. When having received the message “If possible, I want to introduce some person tomorrow”, we had no hesitation to have a meeting the next day.

That person we met the next day started to talk slowly in nodding and staring into space. While having a meeting, he successfully brought out our business idea/concept, plan of business operation and income/expenses standard like a media interviewer. He may be installed with a highly efficient computer in his brain and click the “Enter” button when nodding and staring into space.

The time passed in the blink of an eye as if we had a TV program interview. He completely turned to be an executive staff of Harbor House Co., Ltd, from an interviewer. At the end of the meeting, every possible subject including the future vision or preparation has been perfectly sorted out.

4 hours later, surprisingly, we received an e-mail from him in which the first idea has been described. We have never seen such a great businessman! He can understand the counterpart instantly and prepare the business advice putting himself in the other person’s place. Even though, he has to wait to get his own business from the meeting. 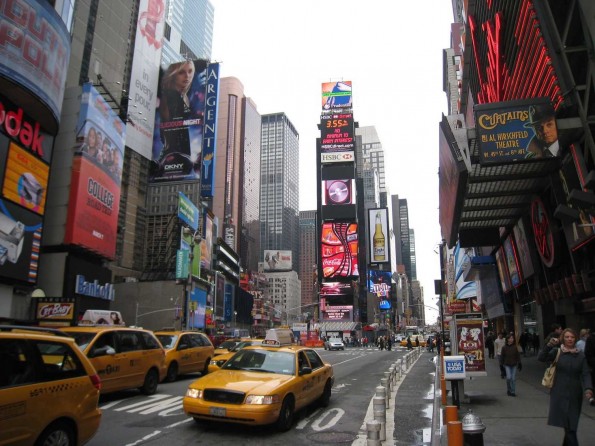 During the business trip to NY, there were more encounters with many people besides above and we convinced that it is really important to act following our instinct and feel the atmosphere on site with our senses.

Including the management of course, every staff/crew should find the important meaning of what’s happening in front of them. It’s actually happening now, however let’s move forward before you stop or look back. Even if you would fail, the road will lead you to the success in some future as long as you move forward with great passion. When you would give up, everything would be finished. Your challenge would be continued until you give up.

Maintaining the power to enjoy the failure, the breakdown and the situation not progressing as desired.

This is what I learned from my NY business tip. Finally, I can stand at the crouch start! The time came for the game to begin!

I am the vice president of the fishing restaurant "Zauo". I have 5 kids! My family is a large one. My motto is "Callenge before you have to." By Jack Welch. I'll post Zauo's original article.