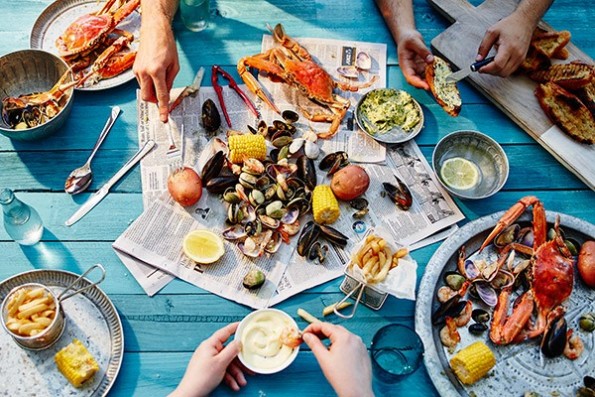 There are a variety of restaurants in the US, but in Hollywood, a casual dining style is much more popular rather than fine dining in formal style requiring the dress code. Casual dining offers relaxing Hollywood-style light menus with something like Pizza, Fried Calamari and Shrimp Cocktail arranged from authentic Italian and French. This issue features the introduction of casual seafood menus loved by Hollywoodians (people in Hollywood). 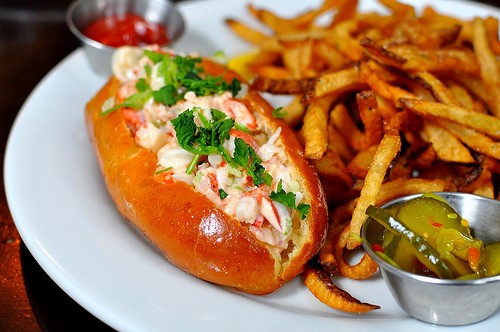 Hollywoodians love the Lobster Roll in which fresh and juicy lobster meat is fully filled. With some faint sweetness of the lobster, this menu is so popular in many restaurants in Hollywood. Fried potato, that means French Fries in the US, is surely served as side menu. The price is around 3,000 yen, I guess. It’s a substantial item that satisfies you. 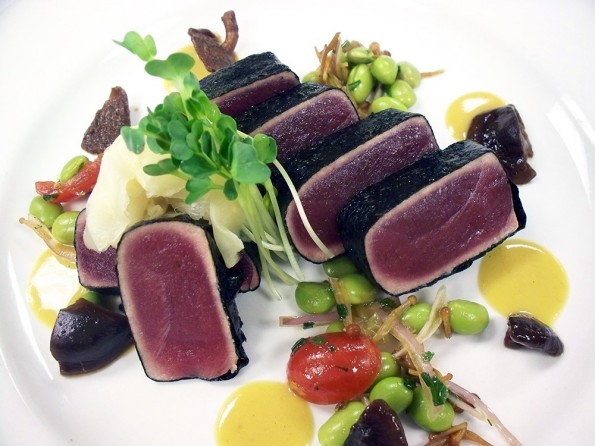 Exactly following the menu name, lightly roasted fresh Tuna is encrusted by crispy Nori (laver), which is so popular among the celebrities with higher beauty/health consciousness. Both Tuna and Nori are familiar to us Japanese, however we feel something innovative with this menu, don’t we?

Mustard sauce or thick soy sauce blended with oil are recommendable for this plate, in general, however each restaurant seems to have a unique own flavoring. 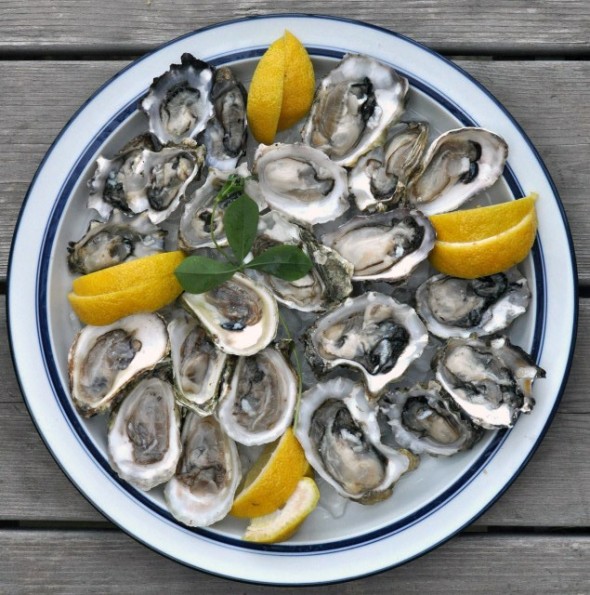 The item, which has an indisputable position, is Raw Oyster. We can eat them at Restaurant bars in Japan as well. It tastes better with squeezed lemon juice usually, but many people are enjoying the raw oysters with Tabasco in addition to lemon juice here in the US.

How to cook Tuna Steak with Japanese taste, a popular menu in Hollywood

Then, I will guide you how to cook Tuna Steak, which is popular among the restaurant menus in Hollywood. Nowadays, in conjunction with the worldwide Sushi boom, Japanese seasonings are penetrating in foreign countries. Soy Sauce and Miso are very often used in seafood restaurants in Hollywood as well. With familiar seasonings used in our daily life, how about cooking the simple and healthy Tuna Steak for your dinner tonight? 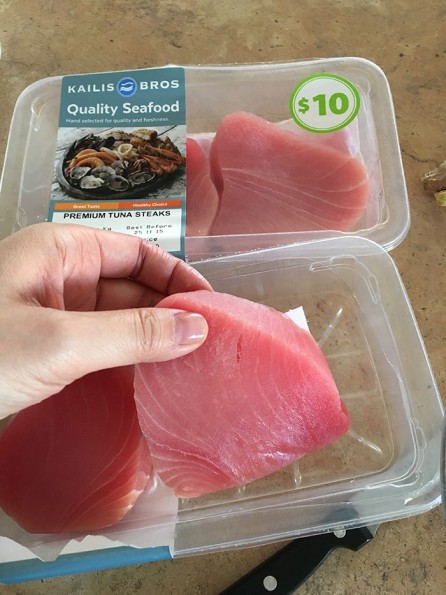 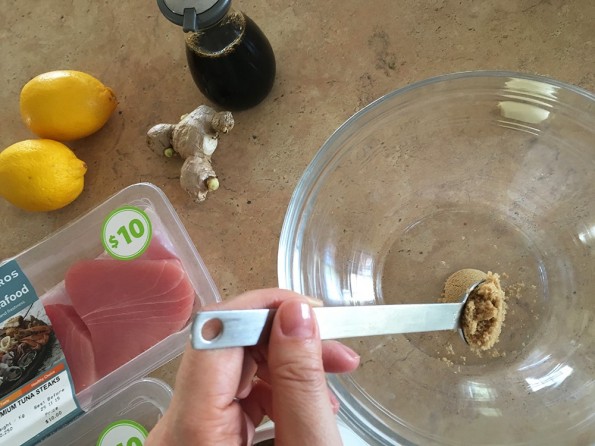 ①Firstly, prepare the marinade sauce for Tuna Steak. Put the above amount of soy sauce, grated garlic/ginger, and Mirin (sweet sake) into the bowl and blend them well. 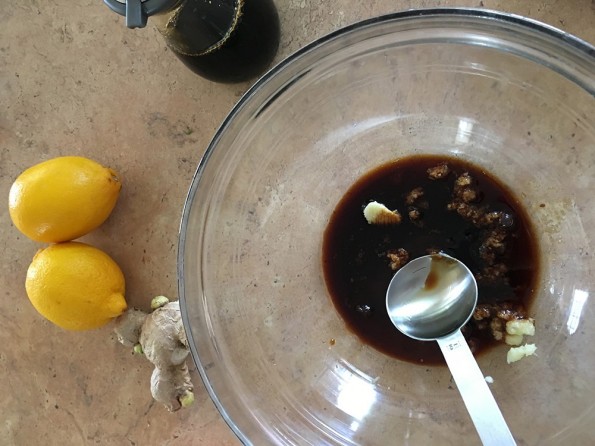 ②Marinate the slices of Tuna for 20 -30 minutes. It is also recommendable to add Wasabi into the marinade sauce if you like. 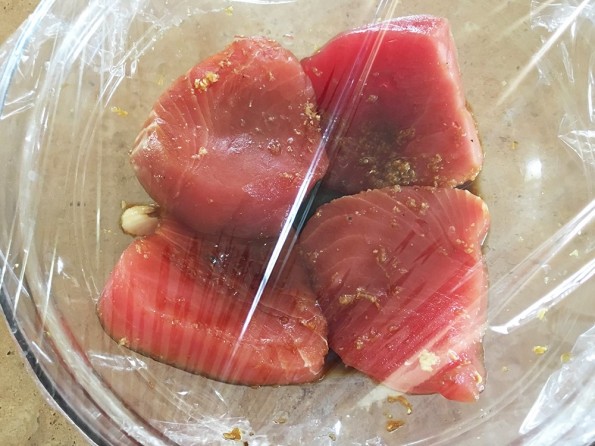 ③ When slices of Tuna are briefly marinated, coat starch powder on both sides. As over coating of starch powder causes the thick and sticky feel in the mouth, the important point for good Tuna steak is to tap off the extra powder. Then, pour the extra virgin olive oil into the pan and make sure that the pan becomes hot. Grill the tuna until cooked crispy on surface. 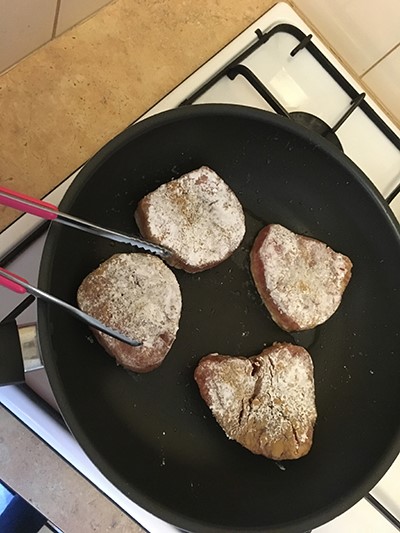 ④When the inside of tuna is cooked well, pour the marinated sauce into the pan. Heat until the water is almost evaporated and it’s ready to eat. Serve upon a plate with lemon. Tuna Steak with salad on the side is common. 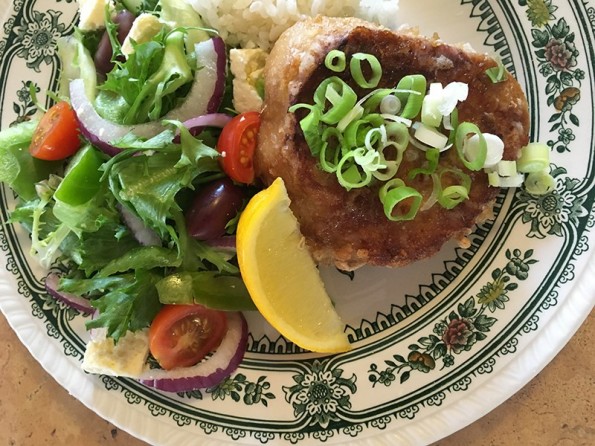 Cooked with almost Japanese seasonings, however, it looks like something different from Japanese cuisine. Soy sauce with citrus juice is good for this dish, however, they prefer the mayonnaise blended with wasabi and soy sauce in the US. If you have Tuna Sashimi losing its freshness, please try this menu.

Some of the menus introduced here are served at “The Hungry Cat” or “Connie & Ted’s”, the popular seafood restaurants in Hollywood.

I wish I could introduce more hot news in terms of the overseas seafood situation as well as helpful menu recipes for you from now on.