It is the season for this seafood now! Part.2 – Kelp Grouper 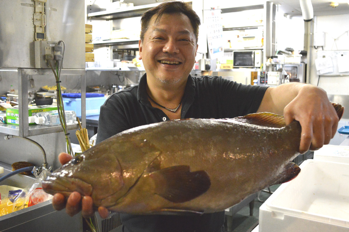 A prized fish, “Kue (Kelp Grouper)” is so rare that it is called “Fish of Phantom”. In this issue, Mr. Kokubo, Grand Chef of “Zauo” in the Kanto area, kindly explained about the best season for Kue and recommendable way to eat.

―――What’s kind of fish is Kue? It is not so familiar in the Kanto area.

(Mr. Kokubo) Although not being well known in the Kanto area, many people know Kue very well as a prized fish in Kyushu. It is called “Kue” in Kanto, however Kyushu people call it “Ara”. It has an unattractive figure but tastes so good, with soft and full white meat as well as rich collagen around the thick skin. There is no part to be thrown away, even stomach and gills, and you can enjoy the sophisticated and light fat meat, differing from a top-quality tuna with a high fat-content. Cooked in a pot at the table, you can enjoy the amazing taste of the soup stock with dissolved collagen around the skin. 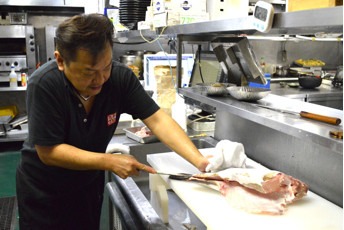 Mr. Eiichi Kokubo, Grand Chef of Zauo in the Kanto Region. Having experienced cooking mainly Japanese food from his teenage time, he welcomes the 10th anniversary this year since having joined Zauo. Now searching for a bride.

--- Please tell me about the best season and growing district of Kue.

(Mr. Kokubo) The growing district of wild Kue is almost Kyushu, mainly Nagasaki. Still, it is not readily available. It is also cultivated in Nagasaki and Wakayama. The best season for Kue is winter. When a Kyushu sumo tournament is being held in November, Sumo wrestlers enjoy “Kue Nabe” cooked in a pot at the table together.

--- What is the reason Kue is being called “Fish of Phantom”?

(Mr. Kokubo) It is because Kue is so rare and difficult to catch. Being a nocturnal fish, it is hiding behind rocks and occasionally swimming away in the deeper sea in some season.

Furthermore, they never show any interest in the bait. The name of “Kue” is said to come from the words “Kue, Kue!” (Eat, eat!) . Additionally, Kue grows slowly and it cannot reach a weight of 2 kg even after 2 or 3 years. Kue with a weight of 30 kg – 40 kg is supposed to be living for 30 -50 years. The value of Kue is in proportion to its weight.

----Please tell us the simple recipe available even at home!

(Mr. Kokubo) I will recommend “Aluminum foil-steamed Kue”, which is easy to cook, but you can enjoy the soft white meat and springy skin taste. 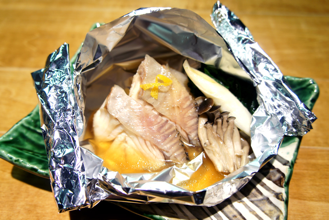 How to cook “Aluminum foil-steamed Kue”

2. Dip above (1) into boiling water and then soak in cold water quickly to tighten the meat.

3. Wrap above (2) and seasonal vegetables with 50cc of soup stock.

Besides this menu, “Kue Shabu Shabu” is also easy and tasty.

Slice off the Kue meat 5 millimeters thick and dip into the hot soup stock like Shabu Shabu. Good with soy sauce and citrus juice. You can enjoy the rich taste with the dissolved fat in the soup.

(Mr. Kokubo) “Zauo” is offering Sashimi, Nabe (a hot pot) and Karaage (deep fry) of Kue. We cannot have any Kue menu some years, however we are ready to offer it this year, 2015. When we get in Kue, we release it in the fish tank in the restaurant and you will be astonished with its large size and magnificent presence. Please make sure to visit Zauo to catch it!

Springy texture of the skin! This is the special and must-eat taste!

Once you eat “Kue”, you cannot forget the rich fat meat and springy skin taste differing from Flatfish or Sea bream. Kue is not so familiar in Eastern Japan, but we recommend you to try it even once in your lifetime if you have not eaten it yet! “Kue” is the best feast for the special dinner as well as celebration event.

A free writer loving to cook and eat fish. Through the experience to cut and trim tens of thousands of fish and shellfish, I learned the enjoyment as well as difficulty in cooking seafood. Currently, I am studying about the fisheries and fishing industry.